While the opposition parties in India are recklessly engaged in criticizing the Modi-led BJP government on the issues of its GDP growth and allegedly weakening economy, the same government has been acknowledged by the World Economic Forum to be the third most-trusted government in the world.

At the same time, a few days back the Moody’s Investors Service, a USA based reputed financial analysis provider has upgraded India’s rating after some 14 long years.

Do the Indians have a reason to rejoice?

If the answer is given by a pro-Congress economist, he would say it’s not a big deal. If it comes from an anti-BJP politician, he would say it’s a shame that we accept the ratings and ranks given by foreign companies. And if the answer comes from an thoughtful and neutral third party, it would opine that to be considered 3rd most-trusted government in the world by WEF and to get a higher rating by an internationally reputed service like the Moody’s, is by no means an ordinary news for a developing country like India.

It is understandable that businessmen and economists who got favors from the UPA government may not be able to praise BJP government’s achievements but recently India’s Ex-Prime Minister Manmohan Singh has made some statements and it is sad for the country that a person who himself is an economist and has been India’s prime minister, is not allowed to appreciate the present government’s achievements on global level. 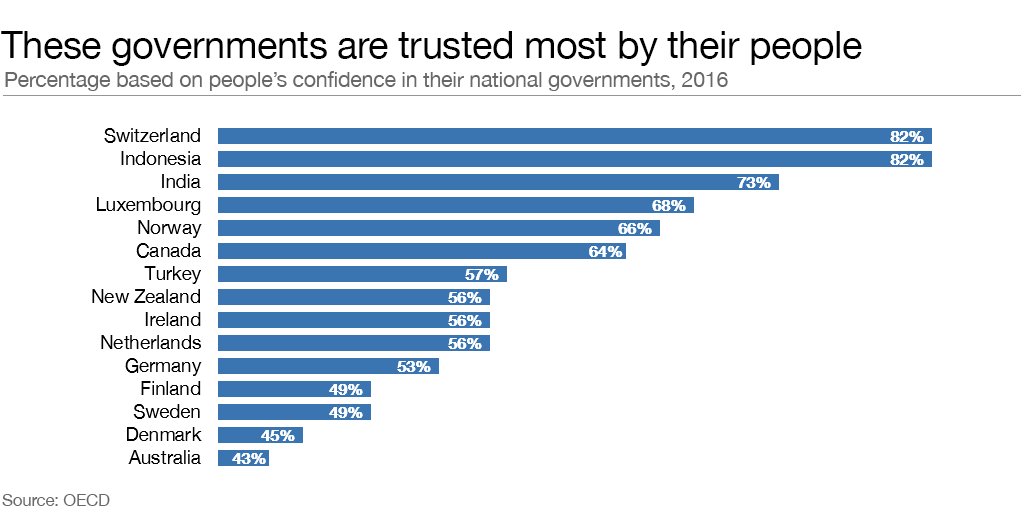 “Narendra Modi-led Bharatiya Janata Party (BJP) government has emerged as the one of the most-trusted government’s in the world, ranking at number three according to a new world survey by the Organisation for Economic Co-operation and Development (OECD).

“Prime Minister Narendra Modi heads one of the world’s most-trusted governments. Almost three quarters of Indians say they have confidence in their national government,” said the World Economic Forum (WEF) while referring to the new report.

Even university students of economy would know that a radical move like demonetization, which flushed out billions of Rupees and forced them to go into India’s banking system, the GDP was likely to go down temporarily before picking up with more force. Why make so much noise when what was expected is happening? The GDP has gone down now but is bound to go up.

“Institutions in India inherited colonial ways and continued to operate under the hangover for seven decades. Irrespective of the political party at the Centre, the political leadership has been reluctant to make institutional changes. It is refreshing to see PM Modi announcing systematic changes, which are strategically allied to the very fabric of India, and not borrowed from another economy. Bills like Financial Resolution and Deposit Insurance (FRDI) along with Fiscal Responsibility and Budget Management (FRBM) Act, Benami Transactions (Prohibition) Act, 1988, Real Estate (Regulation and Development) Act, 2016 (RERA) have been long overdue for an economy of this size and texture.” – https://www.dailyo.in/business/moodys-india-ratings-upgrade-modi-government-demonetisation-gst/story/1/20714.html

While we don’t have to depend fully on what Moody’s and WEF say, we must keep in mind that organizations of great repute do not generally make baseless statements. They must have their tested mechanism for making analysis and predictions.

Indians should not get carried away by cheap political propaganda but focus on helping with the bigger and essential changes that are taking place in India under the present government.