In an interesting statement, Bihar’s Chief Minister Nitish Kumar has urged women in the state not to hesitate, if need arises, to destroy local liquor manufacturing units after April 1, when prohibition on country liquor will come into force in Bihar. He said this in order to encourage women to help fulfill his government’s poll promise that if returned to power, he will stop liquor sales which has ruined thousands of families. 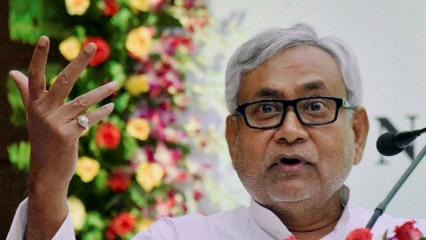 “Do not hesitate to destroy ‘bhattis’ (manufacturing units of country liquor) if need arises and complaint to the call centre,” Kumar said while launching a campaign to make prohibition a mass movement in the state. The Chief minister said a designated cell would be set up in Patna for strict monitoring of prohibition decision and its telephone numbers would be advertised so that citizens could inform, if they see illegal trade in liquor after prohibition comes into force. Nitish Kumar asks women to destroy manufacturing units of liquor after April 1 | Latest News & Updates at Daily News & Analysis

When I read this, I thought it was a good move. I still think it is considering liquor, by nature, is self-destructing as the first thing it does to those who consume it is, drags them into illusion of different sorts, and in such an illusory state of mind, men are known to have misbehaved with, or even tortured, women around them. So destroying liquor manufacturing units is more than welcome and it’s sure to help drunkards get back to their senses.

However, what makes me feel little uncomfortable is the thought of what happens if women start going to liquor factories for destroying them and factually doing it. I am talking about their protection. While the government seems to be committed to protecting them, an assurance like this can remain true only so far it is in power. Assuming women destroying liquor factories will be protected when this government is in power, what happens when it is not in power? Will not all those who lost their favorite bottles be angry and think of taking revenge at the first opportunity? We hope not.

But the reality could be different. Here is the reason:

All living entities are tightly bound by different modes of material nature.  Drinking is a result of being under the control of the mode of ignorance, or tamas. Bhagavad Gita (14.8) describes mode of ignorance as follows:

“O son of Bharat, know that the mode of darkness, born of ignorance, is the delusion of all embodied living entities. The results of this mode are madness, indolence and sleep, which bind the conditioned soul.”

In his purport, Srila Prabhupada says that the mode of ignorance is a very peculiar qualification of the embodied soul.

A degraded person is not likely to understand that by protesting against liquor manufacturers his wife, neighbour or the government has done a favor to him. Under the control of tamas, or the mode of ignorance, he remains revengeful and generally the anger turns first to those who are around and weak, quite often wife and women being among the first ones. This is the reason we see so many crimes against women these days although, going by modern propaganda, they are supposed to be safer than they used to be in the past.

So, while the intention behind encouraging women to destroy liquor factories may be good, the negative outcome of such action will need to be taken into consideration before it becomes a reality. A more effective approach would be to equip the state police with more powers along with training on how to conduct such operations, if need be. Besides, such missions are not very difficult to accomplish when the culture of corruption is curbed and political leaders are committed to fulfilling their duties towards citizens without looking for personal benefits. Let us hope that one day Bihar, and eventually whole India will be free of intoxicants.

There are numerous theories presented by modern scientists on what exactly the Milky Way galaxy is, how it behaves and how its behavior can...